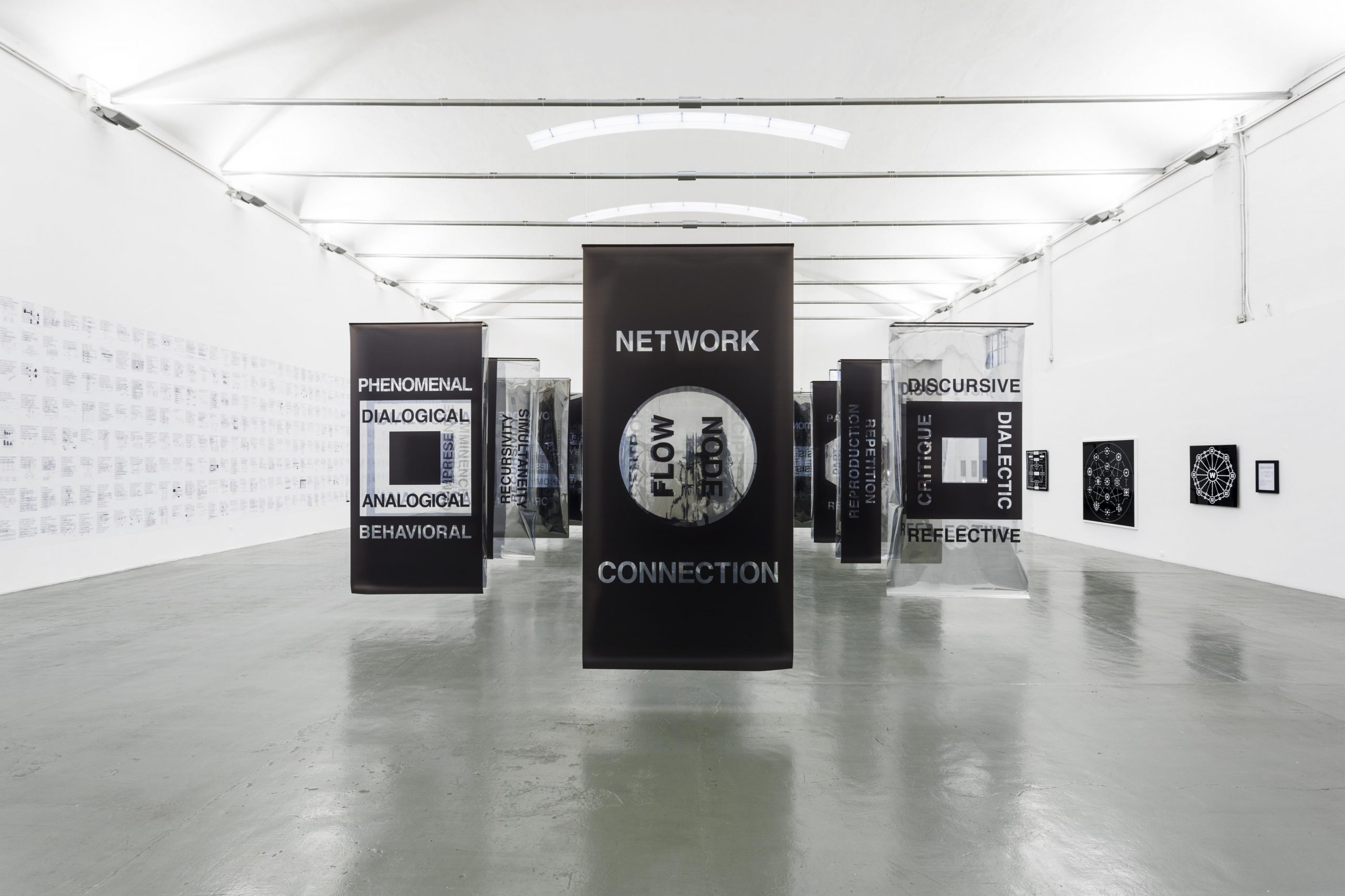 Paolo Cirio’s solo show Systems of Systems reflects on his informational artworks in relation to the ontologies of conceptual art.

In this survey exhibition, Cirio presents new and former artworks addressing current socio-economic information systems. Through analytical, interventionist, or utopian models, Cirio reformulates information theory rooted in early conceptual art and introduces the flowchart as an artistic medium, a visual form and concept for contemporary art. Cirio’s works in the age of algorithms, big data, and ubiquitous networks addresses the aesthetics, politics, and philosophy of information technology impacting all aspects of our society on a global scale.

Beyond examining existing systems, Cirio’s creations are further systems inserted into the networks forming society today. The flowcharts of Cirio’s systems depict the power of creation, knowledge, and agency in the information society. Cirio’s flowcharts became aesthetic objects, images of operations within networks of technological, financial, cultural, and social systems. The schematic, instrumental, and functional character of the flowchart is the quintessential portrayal of the inexorable technocratic order encircling contemporaneity. The visual language of the flowchart circumnavigates the pictorial image and becomes the relevant iconographic imagery of the information age.

Cirio’s work continues the trajectory of conceptual art that considers systems of information for aesthetic and social inquiries. In particular, Cirio refers to the fifty years after the coining of System Aesthetics in 1968, and the following exhibitions Information at MoMA and Software at Jewish Museum in 1970. With the new artwork Foundations in the central space of the gallery, Paolo Cirio identifies an aesthetics and history related to information systems increasingly interrelating with social fields. Giorgio Persano Gallery offers the ideal venue for Cirio’s mid-career survey, given the gallery’s decades-long involvement in conceptual art as well as showcasing the work of the seminal artists who were featured in the Information and Software exhibitions.

Thanks to NOME Gallery – Berlin

Sociality, 2018
Digital prints on paper
Variable dimensions
In “Sociality”, Cirio collected over twenty-thousand patents submitted to the U.S. patent office. Obtained by Cirio through hacking the Google Patents search engine, the work exposes inventions that employ devious psychological and profiling tactics through artificial intelligence, algorithms, data mining, and user interfaces. In the exhibition, the public confronts large-scale compositions with hundreds of images of flowcharts that invoke the complexity and magnitude of such uncanny plans to program people.

Meaning, 2019
Acrylic on engraved mirror glass
130 x 130 cm ea.
“Meaning” consists of a series of three flowcharts drawn by Cirio to display his semiotic theory regarding the formation of meaning on the Internet. The artwork delves into the cognitive, sociological, and psychological aspects of the modern construction of social meaning. “Meaning” is made of mirror slabs that are painted, cut, and engraved. The multilayered compositions create depth and optical movements, compelling viewers into self-reflection on the significance of the Internet in their lives and society. The three pieces can be shown as a triptych or as individual works titled Context, Subjectivity, and Collectivity.

Open Society Structures, 2009
Serigraph prints on two layers of plexiglass
54 x 39 cm ea.
In “Open Society Structures”, Cirio drew three flowcharts that explore the shaping of the social structures of culture, politics, and economy, bringing together egalitarian values, collaborative perspectives, and edifying propositions. The artist outlines these systems as a creative process which can contribute to the improvements of societal organization. The triptych is made with serigraph print on two mounted layers of glossy black and the clear plexiglass simulate blackboards with process thinking drawings.

Gift Finance, 2010
Digital print on plexiglass and embossed plastic card with frame
100 x 100 cm
29,7 x 42 cm (+ frame)
In the work P2P Gift Credit Cards, Cirio hacked credit card technology to envision an alternative financial model based on a peer-to-peer social architecture. “Gift Finance” is a monetary policy invented by the artist proposing the democratic creation of money for interest-free universal credit. Cirio exploited credit card algorithms to generate unique card numbers that were issued on the website P2PGiftCredit.com. The flowchart of the financial model and a framed credit card are displayed together.

World Currency, 2014
Digital print on plexiglass and digital print with frame
100 x 100 cm
42 x 29,7 cm (+ frame)
In World Currency, Cirio conceived a mathematical equation and an algorithmic trading flowchart for creating a complementary currency. The artwork addresses the inherent instability of both digital and national currencies by examining algorithmic trading and the political economy of the currency exchange market. The conceptual artwork is displayed through a large print of the flowchart of the algorithm for the currency trading, as well as a framed print with the equation explaining the mathematical model.

Hacking Monopolism Trilogy Flowcharts, 2005-2011
Digital print on plexiglass
54 x 39 cm ea.
This trilogy of algorithms exploited the technical and economic vulnerabilities of three major Internet companies, Facebook, Amazon, and Google, reconfiguring the way they misappropriate, and monetize large quantity of information and user interactions. Through custom hacks programmed by Cirio, he found and exploited security vulnerabilities within the Internet giants.

Foundations, 2019
Inkjet on clear film
16 x (300 x 150 cm ea.)
With the new artwork “Foundations” in the central space of the gallery, Cirio identifies an aesthetics and history related to information systems increasingly interrelating with social fields, reflecting on the ontologies of the conceptual art.